A Quakertown Community School District teacher, who made life mis­er­able for quar­ter­backs as a col­lege defen­sive end, has been induct­ed into the Moravian Athletic Hall of Fame.

Dominick Cusumano, sec­ond in Moravian College his­to­ry with 27 sacks, was offi­cial­ly induct­ed on Nov. 9. “I’m just so proud and excit­ed,” said Mr. Cusumano, a social stud­ies teacher at the Sixth Grade Center. “We had an out­stand­ing defense. There were great play­ers on those teams, and we had a lot of suc­cess. With suc­cess comes recog­ni­tion. It was such a great experience.” 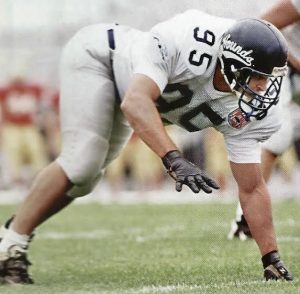 That defense includ­ed Shawn Storm, a seventh-grade read­ing teacher at Strayer Middle School, who start­ed at the oth­er defen­sive end posi­tion for the Greyhounds. “We played on one of the best defens­es in the his­to­ry of Moravian College,” Mr. Storm said. “The front four on that defense was tena­cious. We com­ple­ment­ed each oth­er so much and gen­uine­ly cared about each other. 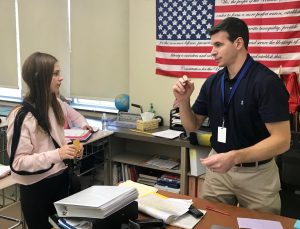 “Cus was a qui­et, lead by exam­ple type of guy for that defense, which was nice because I did all the talk­ing for us both. We both played the same posi­tion — oppo­site sides, so I worked with him every day. I got to wit­ness first hand his relent­less work eth­ic and ath­let­ic skill.  There were many games where we’d be lin­ing up and I’d yell over to him ‘Meet you at the quar­ter­back.’ He got there a few times before me, but we both cel­e­brat­ed each other.

“He was like a broth­er to me on and off that field and I could­n’t be more hon­ored to see him induct­ed into the Hall of Fame. I’m proud of him and I’m excit­ed for him and his family.”

In a 1997 sto­ry in The Morning Call, Moravian coach Scot Dapp described his top defend­er this way: “Dom’s a qui­et guy, is not indi­vid­u­al­ly goal-oriented. He wants to get a sack because that will help the team. He’s the con­sum­mate team player.”

Not sur­pris­ing­ly for a future teacher, Mr. Cusumano was equal­ly adept in the class­room as the grid­iron. The 1998 Moravian grad­u­ate, who trans­ferred from Millersville University after his fresh­man year, was select­ed to the Middle Atlantic Conference All-Star First Team in both 1995 and 1997, and he also earned a spot on the GTE/CoSIDA Academic All-District Team as a senior and the Hewlett-Packard Honorable Mention All-America Team as a sophomore.

After grad­u­at­ing from Moravian, Mr. Cusumano was hired by QCSD to teach fifth grade at Tohickon Valley Elementary School. Two years lat­er he moved to Milford Middle School, where he remained until its clos­ing, and has been at SGC since it opened last year.

“I like being able to see kids grow, espe­cial­ly at this age,” Mr. Cusumano said. “They’re so dif­fer­ent in June than when you first meet them in September. They’re work eth­ic is dif­fer­ent, as is what they know and how much they can do. They’re sponges. They just absorb every­thing. It’s great to see them grow over the course of a school year.”

Mr. Cusumano grew up in Pennridge, and played for the Rams in three Thanksgiving games against the Panthers, win­ning as a senior. These days, his alle­giance has trans­ferred to the Q. “I root for Quakertown,” he said. “I know all of these kids.”