No mat­ter the art assign­ment, there’s a good chance that if Kenzie Sawadski is involved, her cre­ation will stand out.

Kate Fetterolf of Strayer Middle School said “What always stood out for me is that she is inde­pen­dent­ly moti­vat­ed. She uses her own inspi­ra­tion and resources to shape her cre­ative dri­ve and is con­fi­dent enough in her­self to exper­i­ment. It’s one of the rea­sons she has been so suc­cess­ful.” 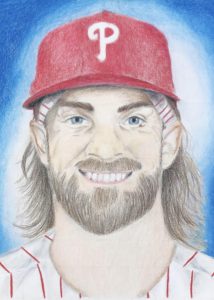 The results speak for them­selves. During her senior year at QCHS, Kenzie’s work has been cho­sen for the Bucks County Student Arts Expo in Doylestown and the Hope & Healing Juried Art Show at The Baum School of Art in Allentown. Her draw­ing was also used to design the “Sea of Blue” t‑shirts, sold by Free Press graph­ic & pub­lish­ing at the Quakertown-Pennridge Thanksgiving Day game.

More recent­ly, Kenzie was one of 10 stu­dents in the Philadelphia area to win the 2020 Phillies Drawing Contest. Had the sea­son not been post­poned because of the COVID-19 pan­dem­ic, Kenzie would have been at Phillies Opening Day, where her por­trait of Bryce Harper would have been dis­played on PhanaVision.

“I am a huge Philly sports fan,” Kenzie said. “It was excit­ing to win the com­pe­ti­tion and get tick­ets to a game. I can’t wait to see my draw­ing up on the Phanavision screen.”

While her teach­ers say Kenzie excels at var­i­ous forms of art, she doesn’t nec­es­sar­i­ly have a pref­er­ence. “I just like to do it. It’s just in my nature, I guess,” she said. “I’ll try any­thing. The only thing I don’t real­ly love is work­ing with met­al, because it is kind of hard to get right, and there is fire and met­al shards. A few things I have real­ly enjoyed are clay, oil paint­ing and graphite pen­cils. Graphite pen­cils are real­ly nice because you don’t have to have all the right col­ors and they blend real­ly nice­ly. Currently I am start­ing to learn how to draw in Procreate on my iPad.

“Art isn’t bor­ing,” she con­tin­ued. “I like work­ing with my hands. I like fun projects. It’s real­ly the only sub­ject I enjoy in school. I like just being able to cre­ate.”

With the state clo­sure of all school build­ings, Kenzie “absolute­ly” miss­es “my friends and my teach­ers.”

Though she hasn’t made a final deci­sion on whether to attend col­lege, Kenzie has been accept­ed into Millersville University’s Bachelor of Fine Arts pro­gram with a con­cen­tra­tion in Graphic Design. “They have a nice cam­pus, and it’s not in a city,” she said. “It’s big, but it’s not too big. My par­ents both went there, too.”

As for a career, Kenzie said, “I don’t quite know yet, but some­thing in an art field.”

Whatever she choos­es, Mrs. Christine said she has no doubt “Kenzie is going to be suc­cess­ful in what­ev­er she puts her mind to.”