Churchville stu­dents and staff from kinder­garten to third grade had a blast with Todd Parr on Friday, October 26th. Todd Parr is the author and illus­tra­tor of more than 40 books for chil­dren, includ­ing the New York Times best­selling The I Love You Book, The Earth Book, and The Thankful Book. He is the co-creator of the pop­u­lar chil­dren’s tele­vi­sion show ToddWorld as well as short films for Sesame Street. Todd’s books have won sev­er­al awards and his TV show, ToddWorld, was nom­i­nat­ed for three Daytime Emmy Awards. His bold and col­or­ful illus­tra­tions share pos­i­tive mes­sages that make read­ers feel good about them­selves and oth­ers. His pre­sen­ta­tions includ­ed read­ings from some of his most pop­u­lar books, such as It’s Okay to Be Different.  He also shared a bit about his life and his writ­ing process. Todd took time to speak with stu­dents, includ­ing some first graders who pre­sent­ed class books to him. He even shared a sneak peek of his soon to be released titles. Todd came all the way from California to meet with stu­dents at Churchville, as well as Newtown and Richboro Elementary Schools. 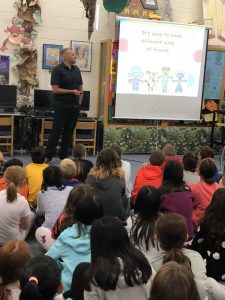