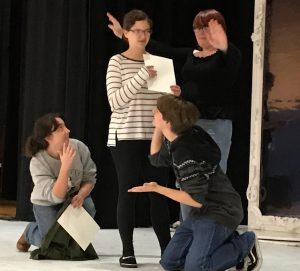 A touch of Broadway came to Quakertown Community High School as pro­fes­sion­al actors led work­shops for more than 100 stu­dents and then per­formed Shakespeare’s A Midsummer Night’s Dream.

A touch of Broadway came to Quakertown Community High School Oct. 25 as pro­fes­sion­al actors led work­shops for more than 100 stu­dents and then per­formed Shakespeare’s A Midsummer Night’s Dream.

“Many stu­dents nev­er get to see some­thing like this, so it was real­ly cool to be exposed to it,” QCHS senior Emma Geiser said after par­tic­i­pat­ing in the work­shops. “It brings Shakespeare to anoth­er level.”

Classmate Jenny Starzecky added, “Everyone in our class was real­ly going for it. It was fun to see all of us doing this.” Jenny said work­ing with the actors “helped us make a con­nec­tion with Shakespeare, rather than just read­ing his work.”

“Our kids real­ly love this expe­ri­ence,” Mr. Burch said. “This is a mem­o­ry that after they’re away from here for a year or two, they’ll get togeth­er and remem­ber this. We have great kids and they need an expe­ri­ence like this.”

Mr. Burch, part of an out­stand­ing English depart­ment that includes, Brett Farley, Rachel Girman, Mike Mackey and Ryan Stetler, said edu­ca­tion needs to be “more than the bell rings and the stu­dents start read­ing. This is one of those exten­sions that will make their high school career memorable.”

The four work­shops for the Advanced Placement and hon­ors stu­dents were:

School Board mem­ber Mitch Anderson stopped by the school to watch the work­shops. “The actors are very effec­tive instruc­tors,” he said. “The stu­dents were engaged. They real­ly got into it.”

One of the actors, Dane McMichael, grew up in Silverdale and grad­u­at­ed from Pennridge High School before attend­ing DeSales. “Shakespeare didn’t real­ly click until my first year of col­lege,” he said. “Now, most of my pro­fes­sion­al gigs are because I can do Shakespeare.

Mr. McMichael said “It’s very reward­ing to work with the kids and get them away from the dai­ly grind. It’s real­ly grat­i­fy­ing to watch them and hear that first laugh when they get it. You look into their eyes and see that some­thing clicked. It means a lot to me.”